Got back about 5pm and needed to wash pants & socks…

I then tried to capture the sun on the pool (as it looked like stars to me – especially after the alcohol !!!) – I’m no David Bailey but here you go… 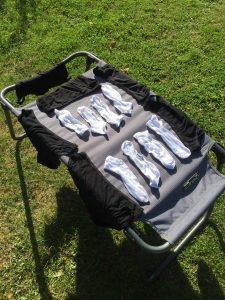 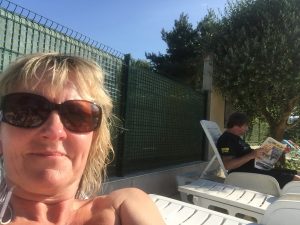 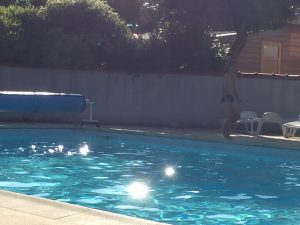 So we polished off the Kir Bretons, then had a wander along the front and went to a tat shop (got some Breton jewellery for my mum & me & also a fridge magnet for Aunty Et).

Then went to the place next door to where we had the Kir Bretons as it was more “restaurant-ey” and Dave had had Entrecôte (rare) with Bearnaise sauce and I had my usual (Poulet Maison Salade) avec un ouef !!!

Had a sparking Kir for aperitif, white wine with the meal and tea (pour moi) and cafe (pour Dave) after… 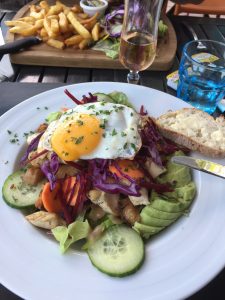 Went to L’Etables Sur Mer for the market – and it ended up being only 6 food stalls (😂) so we bibbed on back to the same place as yesterday but went to the Centre Ville today (not Le Port where the market was).

Bit cloudy to start with but found a place overlooking the bay and here’s My Dave enjoying his cafe au lait – and look – I found a friend (shhh – don’t tell Bertie I was cheating on him !!!).

THEN the sun come out and we ordered two Kit Bretons (Kir liqueur and Breton Cidre !!!) – which came complete with snacks in a silver cup with a map of Ireland 🇮🇪 on !!! 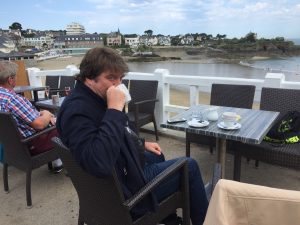 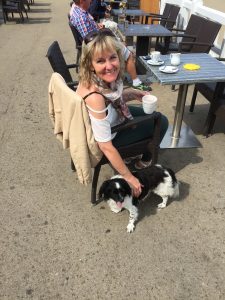 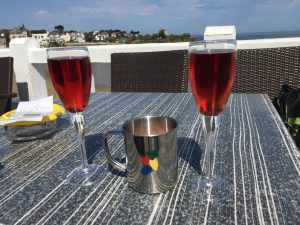 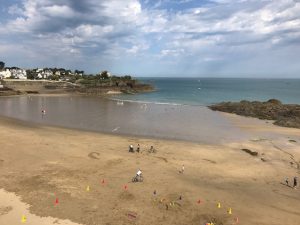 Initially went to the Centre Ville (town centre) and couldn’t see any stalls so practiced my rusty French A’Level on a little old lady (and she understood me !!!) and said it was at Le Port – so followed the signs, found it and parked up. 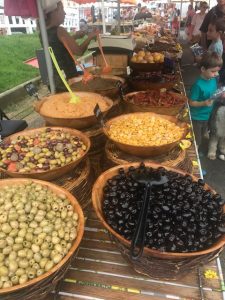 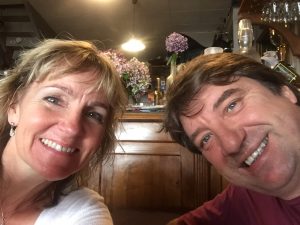 So after Boules, we set off on (what turned out to be) a 2 hour walk down to the beach then up on the cliffs (bit lairy in parts – well for me not Dave !!!)

The photo below doesn’t give the feel of how close (weather-wise) and just how high it was – but hey regardez mon nouveau Breton t-shirt (normally I advocate that horizontal stripes make you larger – but I’m WAY past that now !!!) 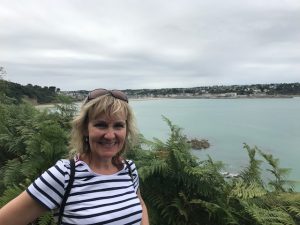 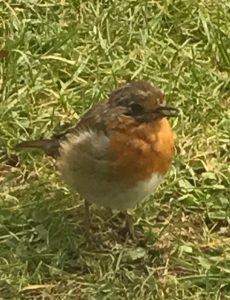 After we left the Pirate Festival, had a wander around the tat shops and Dave had happy memories of his childhood when he saw the “Spud Gun” (I’ve never seen one…) 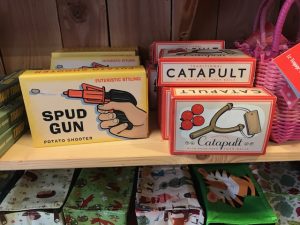 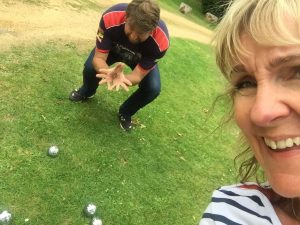 So we trundled off on The Duke for a non-existent 10am Mass in Pordic then bibbed off to the next town (Bicnic) and arrived in time for the 10:30am Mass at Notre Dame de Bon Voyage – gorgeous church – piccie of the altar below.

Let Dave off attending this week (!) and he went for coffee & croissant  across the road then saw (and took piccies of):-

1. A Solex (which is a motorised bicycle that runs on fuel !l 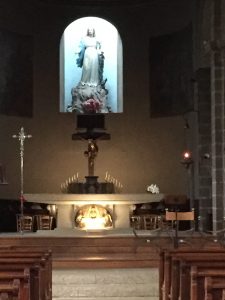 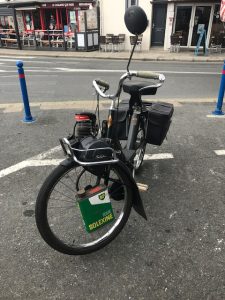 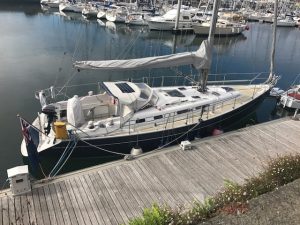 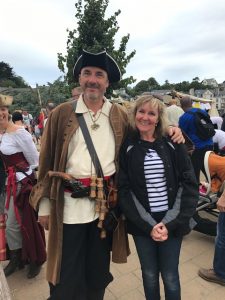 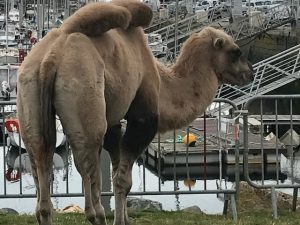 For those of you viewing the blog who haven’t seen it in the flesh – there is a contraption attached to the back of The Van called an “Easy Lifter” on which the little 200cc KTM motorcycle goes (“The Duke”).

It always creates interest with the male populous when we go anywhere as it ISN’T articulated (like a lorry) – it has wheels like a supermarket trolley that spin – so it it like an extension of The Van and is thus easier to reverse.

ANYWAY (TMI for the girls but stay with me…) we got back to The Van parked at the side of the road in Morlaix and Dave frowned as (because the parking spots were narrow) he had parked The Van wheels on the pavement but (as the Easy Lifter (which I will now refer to as the E-L) is narrower) the E-L wheels were on the road just about touching the kerb.

He announced that we should use FaceTime on our iPhones with me pointing my phone at the Easy Lifter wheels so he could see better – in addition to the camera on the back of The Van to reverse out of the spot.

Well I tried my best but the view on my phone (that Dave sees) is just a little tiny square in the bottom left or right (can’t remember which) – and I pointed it OK initially but then he started moving towards me (as he was reversing) and the next thing I knew – the wheels of the E-L spas’d and the whole thing tipped over and banged down on the pavement – with the bike  🏍  on it – so it was sticking its @rse in the air !!!

I had been yelling “STOP, STOP !!!” and banging the side of The Van – but it was too late…

And – to top it all off – got to the campsite ⛺️ and Dave decided we weren’t level so got the ramps out. Now we’ve used them lots before but he usually drives ONTO them (i.e. forwards) but (whilst I was in Reception sorting stuff) – he REVERSED onto them – and snapped off the waste pipe (the pipe you put over a designated hole in a campsite ⛺️ to empty the grey (waste) water). 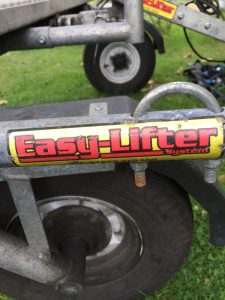 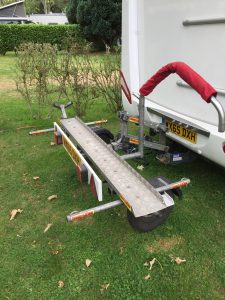 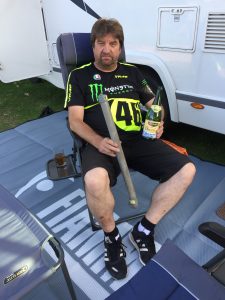 So trundled off after St Julien and came to Morlaix – a bustling, pretty town with a market in the centre (shopping – yey !!!) 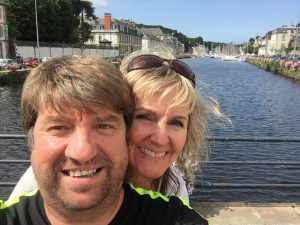 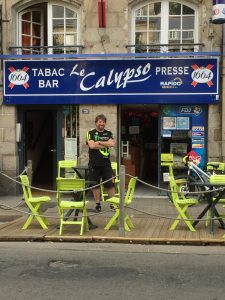 So we packed up at the previous campsite ⛺️ on Saturday at midday then headed east to make our way over to where we are now – just outside a place called Bicnic !!! 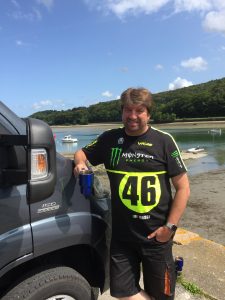 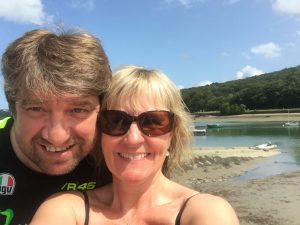 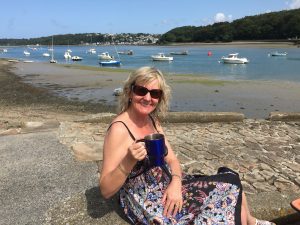 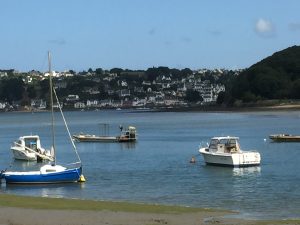