We are approaching Graz here and we are getting dizzy with excitement.  Percy is even taking artistic pictures of fountains! 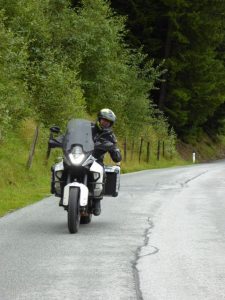 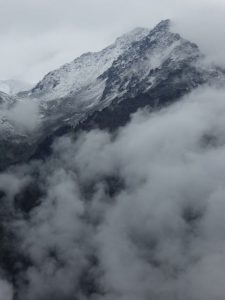 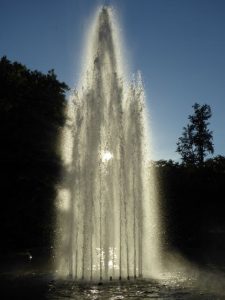 Alice was hit from behind – small bump but the driver scarpered. 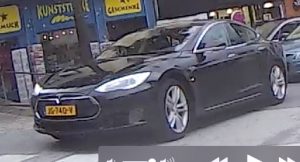 Although there is anger, stress and worry, Percy pulled out a spare lever from his bag!  Genius.  So her bike was fixed in 15 mins.  After a coffee, it was almost (and I mean almost) forgotten.

Found the hotel and all good.  Except for Bill causing the fire alarm to go off because of excessive use of deodorant!  I’m serious.  He set off the sensor in his room and the fire dept turned up when the alarm was set off.  Unreal.

He puts on three layers of spray – Apparently he doesn’t like to risk sweating! 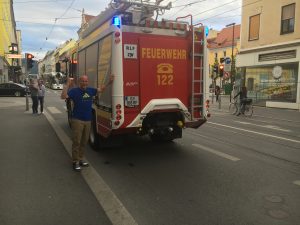 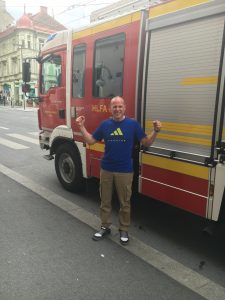 Ended up at Krimml and as the weather was alright, we headed up to the waterfall. Astounding. 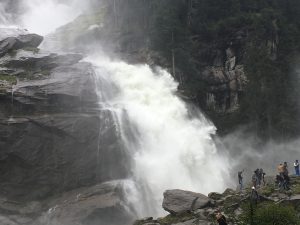 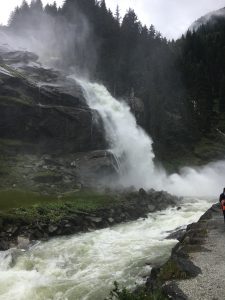 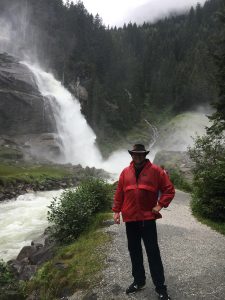 The thing is, Alice said it was a steady walk to the top.  Nothing strenuous or anything.  When climbing up the path to tho top I kept looking round for Sherpa Tensing.  Then on the way back I needed crampons, not a pair of trainers!

But at least I got some exercise. 🙂

Mixed grill back in the hotel and a ‘few’ beers soon calmed my nerves.

Can’t believe it.  Just as we crossed the Austrian Alps, the skies opened up and dumped a load of wet stuff on us.  Couldn’t see any of the mountains hardly.  Grrrr.

Holed up in Innsbruck now and after a meal in a beerkeller and a crap nights sleep we are off to Krimini (?) tomorrow to see the waterfall.  Like that’s going to happen.  Weather is bad tomorrow too.

Still, all looks fine for the racing at the weekend.

Alice got a puncture.  Went down fast, it did.  But Percy and I couldn’t wait to utilise the “Stop and Go” puncture repair tyre plugger kit I’d brought along.  Alice just wanted a new girlie tyre.

The Stop and Go stemmed the leak enough to ride it.  But off we went in search of tyres.  A bit of running around but we came across a place that had tyres and were actually helpful (!) and all was fixed during a coffee.

A Monster about to be surgically operated on… 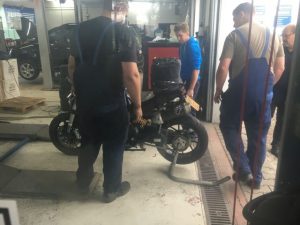 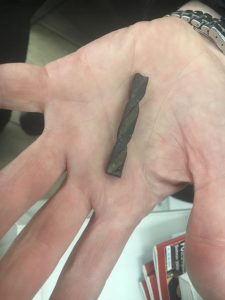 No wonder we were only able to stem the leak!  This was found inside the tyre. 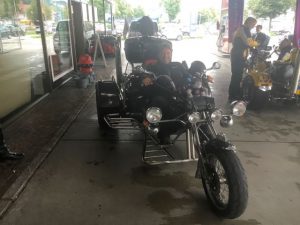 Decided to get North side of Lake Konstaz to a place the sat nav recognised.  Nottengrottenburgersen or something.

Nice place.  Turns out Alice and Percy had booked here as well.  Must stop meeting like this!  Anyway they wouldn’t let me into their hotel.  Apparently chocolate bikes only allowed.  So was referred to another which I have to say, if I had a hotel, it would be like this.  Brilliant.  Hotel Adler.

Everything electric and posh. 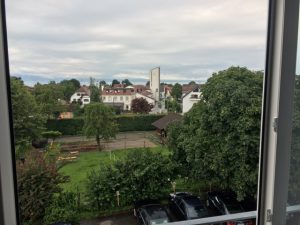 Off to Innsbruck to see some Gross Knockers apparently. 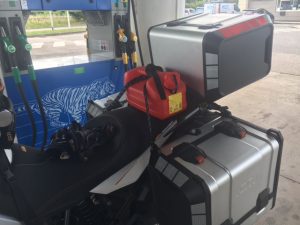 Noooo, I didn’t crash a bar!  But met some chap at the fuel stop (yet another) with a 1290.  ALL the bits on it I want.  Super crash bars.  Will be well useful when SWMBO runs over my bike again. 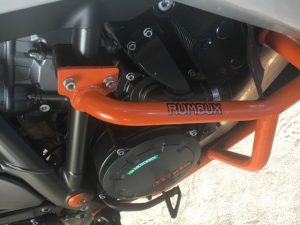