We came across a delightful number of villages and towns north of Nice.  Colamars was a medieval town with a walled surround.  Of course full of quaint shops and hardly represented the way it used to be but what the heck.

Nice panini and coffee nearby tho. 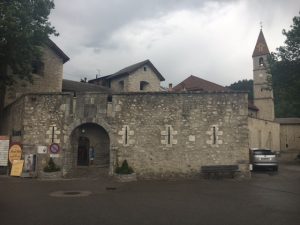 We arrived by ferry in Nice.  To be confronted by the aftermath of the atrocities there.  We went past two shrines of thousands upon thousands of flowers and bouquets.  We didn’t stop to take pictures – it just didn’t seem right but I admit to shedding a small tear at the outpouring of grief that was evident.

We rode on.  Went through Grasse which was a sight for wore eyes.  Great place but as rain was felt for the first time on this trip we knew we had to knuckle down somewhat. 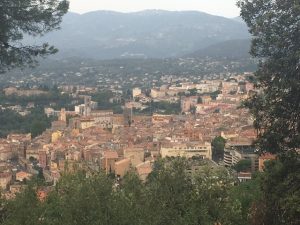 The final campsite was a rural affair.  Shaded by olive trees and a difficult pitch to say the least.  Next to me was this ‘hobo’ of a bloke who seemed to have a bivvy tent, a couple of nylon quick dry outfits and a pair of trainers to his name.  Nice fella but in the morning he did several press-ups, rubbed a stick vigorously with his hands and then ate part of a cured meat stick thing.  Seemed happy enough.  I think he went walking all day.  Maybe, dunno. 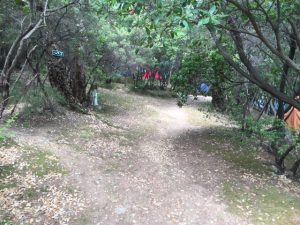 Me?  I was surrounded by a thousand hanging things!  You can’t put stuff on the ground as animals decide to eat them.  Unless its the locals of course. 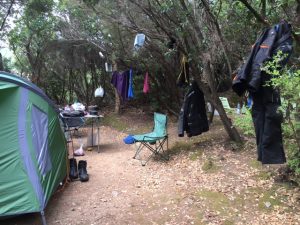 A tour round ‘the finger’.  The top of the island. 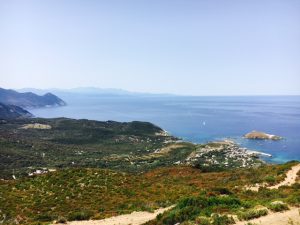 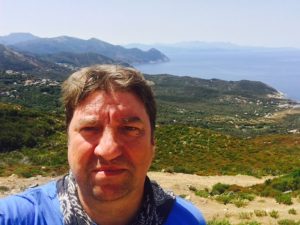 We decided to go for a swim here… 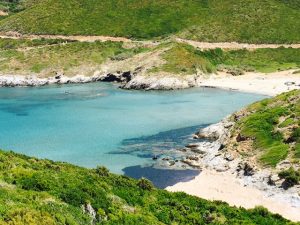 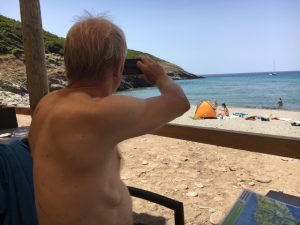 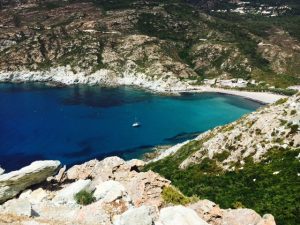 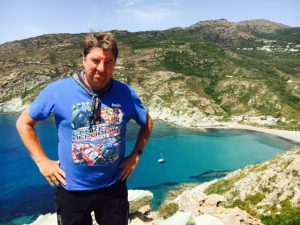 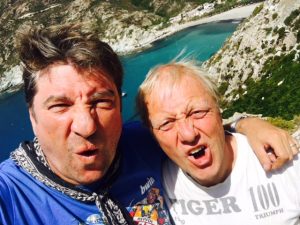 The day started badly.  Firstly Sooty declared his in house urinal system (p1ss bladder) had failed.  This meant there was cleaning needed of his tent floor etc.  A bit of gaffer tape and some general engineering solved problem with the unit!

Then I found I had broken a tooth.  Nothing painful but a part of my molar had gone.  No idea where it went – maybe I swallowed it in the night.  Supposed to be good for fibre intake apparently.

After that, Sootys bike fell over.  CRUNCH.  Helmet bounding down the hill and a broken brake lever but nevertheless rather a spectacle for the rest of the campsite.

This wasn’t the end of it.  On riding through the mountains, we were forced to retrace our steps by some 20km because the route went from a road, to a dirt track, to a rock road to a field.  Bad route planning you might say but it was the cows and pigs on the way that created most concern.  I wasn’t sure if they were going to charge us, kick us or what.  I don’t like cows with horns.  Or any cows for that matter.

Once on a major road we decided to crack on with some km’s.  Stopped, turned the screens upside down for more air as it was nearing 40 degrees heat.  Then pulled off to get to a beach and take in some fluid.  As we approached the beach we were confronted with a ‘naturite plage’ sign.  Not really knowing what to make of it until we were presented with a barrier and let through and then some mature gentleman crossed the road with his wedding tackle swinging in the wind!  THEN we realised the full extend of our route planning mistake.  Off like a shot, I can tell you.

We are not prudish in any sense but it was the surprise of it all that was the problem.

Once we found a campsite we pitched up only to be told about 40 school kids were to watch a film show right next to our tents.  Oh well, put up with it we thought.  They were very gracious and their leader describing they were in ‘English’ territory and to be respectful.  Every person in the group said ‘Thank You’ at the same time.  A delightful group of youngsters. 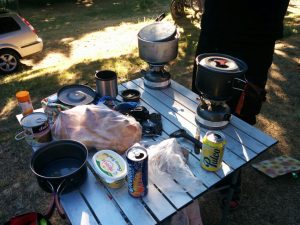 See?  Not a beer in sight.  Vegetable curry, lemon water and an early night.  Whoa.  Steady on. 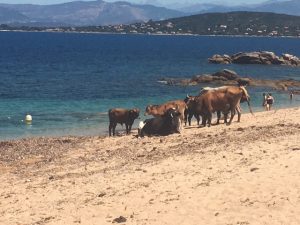 Only in Corsica?  No it happens in Great Yarmouth too.

Drank too much (again) in Bonefaccio.  Got a bit carried away with the atmosphere!  So set off nursing a sore head towards Corti.  Beautiful roads and scenery. 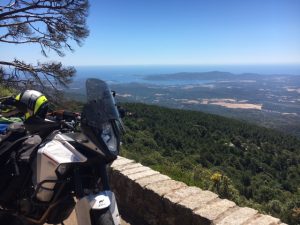 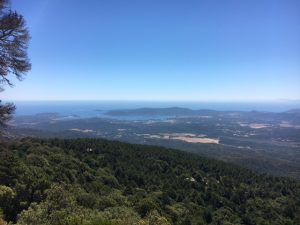 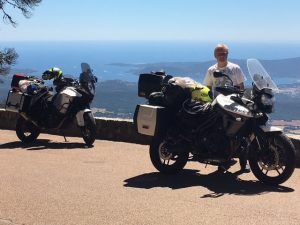 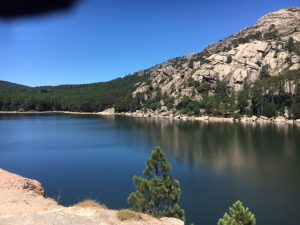 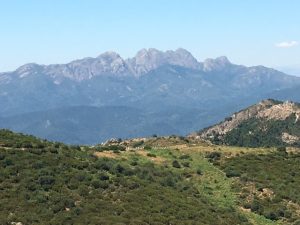 The scene below isn’t of Bonefaccio.  But was en route.

When we arrived there it is an enchanting place.  Full of very expensive yachts and gin palaces.  Sooty was in his element but realised the mooring fees alone were beyond his budget. 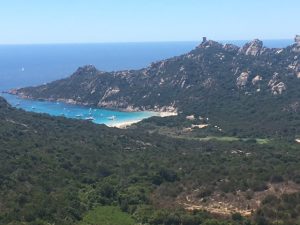 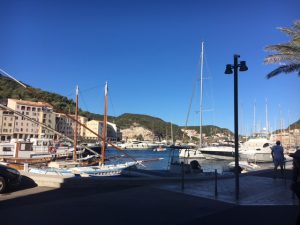 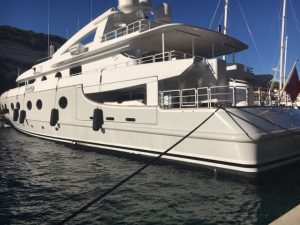 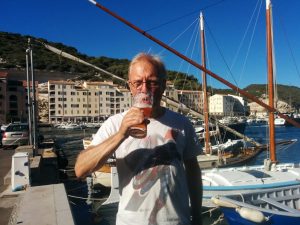 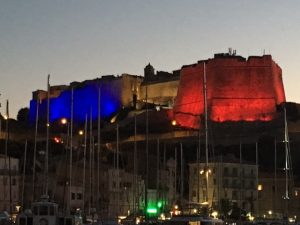 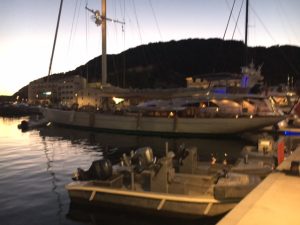 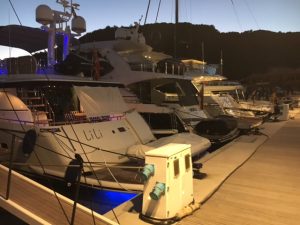 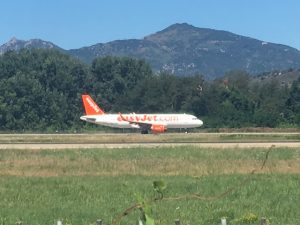 We happened to be passing the airport when there plane took off!  So we stopped took a piccy.